Tag: Union for the Mediterranean 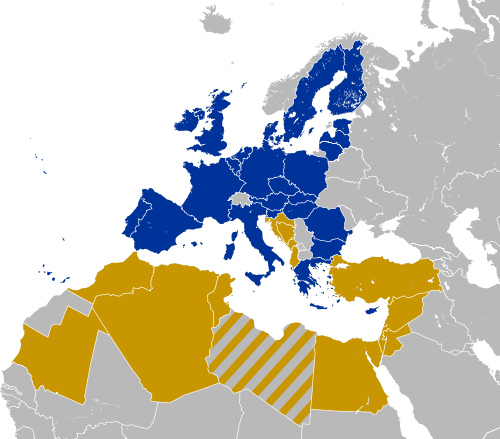 The Union for the Mediterranean (UfM), established in Paris on July 13, 2008, willed by French President Nicolas Sarkozy, was intended as a tool to revitalize the Euro-Mediterranean Partnership (Barcelona Process) by strengthening and developing relations among the nations bordering the Mediterranean Sea.

The entire UfM resided within a “functionalist” approach, a sort of Mediterranean CECA. Pragmatically, it was concretized in six priority areas: de-pollution of the Mediterranean, maritime and land highways, civil protection, alternative energies (Mediterranean solar plan), higher education and research (Euro-Mediterranean University), and the Mediterranean business initiative. Structurally and organizationally, UfM included two co-presidents (one for the north shore and one for the south), a Deputy Secretary-General and 5 vice-presidents, including one Palestinian and one Israeli. The relaunch of the Euro-Mediterranean partnership was however deeply and critically flawed at its birth. In fact, Sarkozy launched the project without consulting the Slovenian Presidency of the EU, the Commission and the Member Countries.

In addition to these fundamental issues, relevant international events, especially in the Middle East, took place. The escalation of the Israeli-Palestinian conflict caused a real deadlock in the negotiations concerning some UfM projects to integrate Israel in new economic and infrastructural projects. The Israeli raids against the Gaza Strip in December 2008 ended all projects and put the re-launching of the Union for the Middle East in great difficulty. It was now clear that all cooperation projects in the region could not disregard a normalization of relations between Tel Aviv and Ramallah.

2011 was a dreadful year for the Union. On the one hand, the crisis of the so-called PIGS countries (Portugal, Italy, Greece, Spain), showed that not only the southern shore of the Mediterranean was unstable, but also the “north”, at least economically. If the economies of the countries bordering Europe should stimulate the growth of Arab countries with large-scale investments (the highways of the sea, for example) through the development of small and medium enterprises (SMEs), neither type of investment was made because all the European countries were committed to safeguarding Greece from collapse and consolidation measures approved to financially stabilize Lisbon and Madrid. On the other hand, from a political perspective, between December and January 2011, the Arab spring broke out and the Union for the Mediterranean has shown itself powerless in the face of these events, because most of the governments that should support Mediterranean revitalization and economic policy (Mubarak in Egypt, Bashar el Assad in Syria, Ben Ali in Tunisia, and Gaddafi in Libya) began to fall under the pressure of the grassroots movement. All the EU Mediterranean countries were much more interested in solving their economic and political problems than in analyzing and paying attention to the socio-political changes in North Africa.

It is clear that the UfM suffered a lack of consultation and an insufficient sharing initiative. The project, launched independently by Sarkozy with anachronistic grandeur, lost relevance with time and because of the difficulties mentioned above. Further impetus was lacking in idealism, courage, and innovation. The specter of failure of the Barcelona Process has paralyzed all partners involved. So, now, it has come to the current situation where the UfM is in agony, unable to even speak about the events that are affecting the region and even unable to fulfill its mandate, which took functionalist form in those six areas of action. This standstill has occurred despite the Commission having allocated 100 million euros in three years.