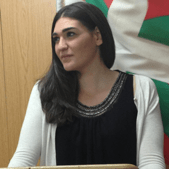 My name is Begoña. I was born in Bilbao 30 years ago and I live in Getxo, probably the most charming town of the seaside close to Bilbao. I graduated in law (with a diploma in economics) in the University of Deusto and moved to Madrid for a year to study a master’s degree in tax advising while I started my professional career as a M&A tax advisor. After, I moved back to Bilbao and studied a master’s degree in financial management.

After almost five years working in Tax I decided to challenge myself and changed to public sector advising, area in which I still work.

We come from our past and look forward towards the future.

I have been risen in Bilbao, a historically industrial city which has been transformed to become a model of innovation and inspiration for many others in the world.

I joined the Basque National Party EAJ-PNV when I turned 20. As well as a familiar Basque nationalist background, which has been part of my education, I have always been interested in politics and I honestly think that the youth has to be involved in the decisions which will affect them in the future. I consider that empowering young people and involving them in the liability arising from the designing of their future makes them more mature and helps towards the construction of critical and innovative minds. I dream with an independent, democratic and socially progressive Basque Country within the EU.

I’ve been interested in European affairs ever since I joined my party and I have had the opportunity to be in the foreign affairs’ board of EGI – the youth organisation of my party. Between 2011 and nowadays I have had the opportunity to attend several youth events held within the European Parliament and to become progressively more involved in European politics, being specially interested in economic policies, innovation, entrepreneurship and development.

I could define myself as a musicaholic and a passionate traveller.

I love garage, surf rock and psychedelic folk from the 70s and I try to go to as many music festivals and concerts as I am able to.

Travelling is my other great passion. Being in contact with other realities, ways of life and cultures enriches and makes us value what we have back home. Some years ago I travelled to India and Nepal and could be in contact with real poverty and I have also travelled to Israel, Palestine and Jordan, which helped me to have my own opinion regarding the middle-east conflict.

Firstly, I would say that making the European Union and the European Parliament more participative to European citizens. More and more issues are discussed and decided at the European level rather than national level and we seem not to grant this fact the necessary importance. Citizens in Europe should be empowered by the European institutions in order to achieve a more democratic EU.

Additionally, I strongly believe in the common values we, Europeans, share. Values such as integration, justice, freedom, respect to minorities, peace and tolerance are values which deserve to be fought for. Building a solid common European project must be one of our goals.