Jerusalem: A Global and Local Issue 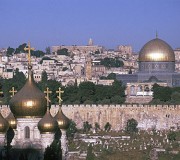 Jerusalem is the holy city for the three major monotheistic religions that share the revelation of the Pentateuch; for Jews it’s the city of the Wailing Wall and of Temple Mount, for Christians the place of passion, death and resurrection of Jesus of Nazareth, for Muslims the set from which the Prophet is believed to have ascended to heaven and where today is the Noble Sanctuary of Al-Haram Ash-Sharif. In the popular imagination, therefore, “the city of Jerusalem” is the Old City, that is enclosed within its walls built by Suleiman the Magnificent in 1538. In addition, it’s universally known that Jerusalem represents a kind of huge concentration of all issues related to the Israeli-Palestinian conflict. In the city, in fact, the historical and religious complexity is palpable even in social and economic relations and so, the region (land) inevitably becomes not only place but also subject of conflict. Within the walls of the Old City the control and management of places, considered sacred by different religions are reason of argument; while in the wider area of the municipality of Jerusalem there is a rather profound disagreement on rights of use and transit of the land, and also on administrative boundaries. This state of affairs is now even more complex because of the objective constraints imposed by the construction of Security Fence that envelops the city and saves only the western side. According to Israel, this physical barrier has been erected for the safety of the Jerusalemite people, threatened in particular after the Second Intifadah, according to the Palestinians it is a division both symbolic and tangible that seeks to impose a de facto situation on the ground; a way to create a path of no-return whereby Jerusalem, enlarged and enclosed, would be permanently attached to Israel, despite international law and the many pronouncements of the United Nations. The use and spatial planning represents one of the main causes of division. In this direction, together with the Security Wall, it is the construction of Israeli settlements in the north (Givat Zeev),South-West (Gush Etzion) and East (Maale Adumim, Kfar Adumimand) of the Old Town. This is, overall, a process of spatial fragmentation, linked to a re-territorialisation in progress since the first Arab-Israeli war. This process, which began to provide “new” Jerusalem a different identity, is causing severe social changes and is exacerbating tensions. Which is Jerusalem? Where does it begin and end? Who and how many are its inhabitants? By analyzing different points of view and international law, it is very difficult to give a clear answer to these questions. What you can instead grasp is the key role that Jerusalem might take, as well as, conversely, the possible marginality. In a context of collaboration and mutual recognition between Israelis and Palestinians, the city may in fact perform a valuable “hinge” function , whether it goes in the direction of two different States which constitute the capital city, or whether it takes into account the hypothesis of a “special” city under international protection, or, again if the prospect of a single multiethnic State was to prevail. Among the two components of ethnic and religious practice there is a clear complementarily: the Palestinian Arab labor can be (in many cases is already) very important for Israel in many fields, such as construction, agriculture, industry and even services, Israelis technology and economic development could instead allow a rapid improvement of living conditions in the city as a whole, for the entire population. In this context, Jerusalem could become again the reference point for the economy of the Middle East and resume its historic role as a bridge between East and West. Jerusalem would again be open and integrated, even more than today, and be destination of large flows of international tourism, which would be an additional driving force for urban development. The city could, on the other hand, merely be an offshoot of the State of Israel, should it continue to remain closed because of the persisting Israeli-Palestinian conflict . The Security Wall, although statistics show a decline in terrorist attacks in the city, it does not seem

to be a long-term solution. It not only divides Israelis from Palestinian Arabs, but even among themselves. In West Bank, in fact, the track cuts the region into two parts and makes connections complex between North/South complicating the connections with other Palestinian centers (Jericho, Ramallah, Bethlehem, Jenin, Hebron). For Israelis, the situation is not at the best because the Security Wall also makes it difficult for relations between those who are inside the path and those who were cut out. Through the land use resulting, the city has lost its traditional hinterland towards all points of the compass except the West, gaining instead preferential links with Israeli settlements within a radius of about ten kilometers from the administrative limits. In conclusion it is right to say that the geography of Jerusalem seems therefore crucial, as well as the city itself, for Palestine and throughout the Middle East, but even for the world as a whole. Although in recent years the general rule prevailed in considering the status of Jerusalem as a problem to be totally submitted to the agreements between the two parties in conflict, one gets the impression that a definition of this thorny issue can only be identified through the involvement of major geopolitical players worldwide, including Europe, since the fairness and stability of the solution rests not only on the balance of local or regional, but also on the credibility of the United Nations and the relations between the Muslim world on the one hand and the so-called “West” on the other.