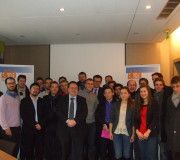 The French city of Strasbourg marks a new step for our European organisation with our series of conventions taking place on the most important European issues, following our convention on youth employment in Paris in November, and in Kosice, Slovakia in December. During a day’s work in the heart of one of the European capitals, our two French members, Jeunes Démocrates and Jeunes Forces Démocrates, welcome us on Saturday, December 14th. Our concerns focus on the next European elections with two different topics: how can local level and youths help us?

European issues at a local level?

In order to understand the importance of the local level, our morning speakers are two Alsatian local politicians. Local level has a special importance for European issues but as Frédéric Le Jehan, territorial administrator, stresses out: “We are trying to move towards a Europe of regions, but when we speak of it, we skip the national level. In France, the latter is very dominating. This is therefore difficult in this context to think about the Europe of regions.” Regions can play another role; they can act as a bulwark against nationalism as our speaker points out.

This Europe of regions is: “more a slogan than a reality” to Frédéric Le Jehan. European public policies exist but citizens do not realize where they exactly come from: according to Pierre Marmillod, mayor and local councillor (FED-UDI): “Citizens and local councillors have an image of a distant and incomprehensible Europe and the peace argument is no longer enough to convince elected representatives to fight for the European Union”. Frédéric Le Jehan compares the different levels of public policy: “Complexity at both local and national level exists but this does not prevent citizens from participating”. The local level can therefore serve as an example and help to “personify the European Union in order to raise participation”. For example, “nothing has been a best publicity to Europe than Erasmus and exchanges within the European Union” according to Pierre Marmillod.

This observation is also perceived by an audience mostly composed of young people: “Europe does not explain properly what it does, and regions do not use the funds at their disposal.”

To conclude, given that the European elections are coming up, the local level has a role to play to allow citizens a direct access to the European Union, which will have to become more politicised. As Frédéric Le Jehan emphasises: “If we want to be able to speak in a simple way of Europe, the latter must be simpler!”

This debate was followed by several workshops related to the next European campaign as well as a leafleting event with local Europe-experienced politicians to help raise awareness of Europe among local Strasbourgeois. 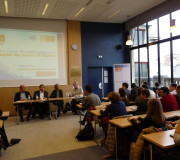 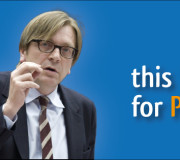