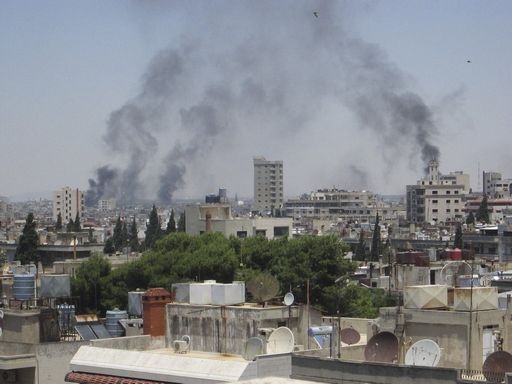 Syria, an important crossroads for at least five millennia, is a country in possession of a very complex ethnic and religious character.

Despite the widespread and well-characterized Arab-Muslim society, Syria is also very important for the history of Christianity. It’s from here that the Apostles began to evangelize Europe, firstly with Saint Paul, and some of the most important monasteries such as St. George, St. Thecla, the convent of our Lady of Saidnaya and the Church of St.Hanania in Damascus are located in Syria.

Out of 20 million inhabitants, Christians in Syria (mainly Greek Orthodox, Maronites, Syrian Orthodox, Melkites, Latin Catholics, etc…), while representing  almost 30% of the population until 1967, today make up only about 8-9% of the total number of inhabitants.

With the exception of a small minority that has still preserved the Aramaic language, the language of Christ, the Christian majority speaks Arabic and has lived in a predominantly Muslim land for nearly thirteen centuries. It has steadily promoted dialogue and has contributed to the progress of local society. Religious freedom, however, has found its place in the space provided by the Arab nationalist Party Ba’aht. The unifying strength of the system was not the Koran, but the adhesion en masse towards other slogans like their independence from and national dignity vis-à-vis the West, the struggle against Israel (especially for matters related to the Golan Heights) and the defense of the Palestinian cause.

Along with the majority of Syrians, Christians have thus suffered from the elimination of free political thought, the fight against the enemy and are continuously subjected to a barrage of propaganda. In the crisis in which Syria has plummeted, Christians find themselves in an extremely delicate position.

The Islamic fundamentalist Salafite matrix has so far been marginal. It has recently been increasing and, at the same time, the clash between the Sunni and the Alawite components is bringing more extremists to the fore.

So, while on one hand the Sunni population has not hesitated to take to the streets and trigger a revolt that has turned into a civil war, on the other hand, the other minority communities, including Christians, have found themselves faced with the dilemma of the strong opposition to Bashar Al Assad and at the same time the fear of Islamic extremism.

Christians, in order to resume dialogue and to stop the violence, have sought to pursue a policy of non-violent reforms along with other minorities (such as the Druze).

In this context, the Syrian Christians are divided into two groups, similarly to what transpired in neighboring Lebanon: the regime’s tacit supporters that want radical reform policies and the detractors, who are mostly young people demanding a regime change.

Many members of this group are active in opposition politics and are located in some regions like Bayrud and Arbi in the region of Damascus and in some areas around Hamh, Homs and Idlib.

The hope is, with continued violence and repression, the peaceful nature of the Christians will cause them to break this silence and concentrate all their efforts in opposition politics. Middle Eastern Christians, instead of giving in to resignation, could therefore play an important role by participating, with moderate Muslims, in the rebirth of their country and thus not interrupting relations of solidarity with the majority of their fellow citizens. Certainly, the outcome of this scenario will depend on many unknown internal and external factors.