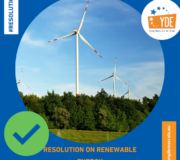 The World and the European Union are facing a historically challenging moment. On the one hand, there is the difficult task of bringing the health emergency under control. On the other hand, there is the need to continue stimulating the economy and introducing major recovery measures. For that, two main pillars have been chosen by the EU, the green and digital transitions. Both will help creating a more sustainable, inclusive and resilient economy.

It is very important to align hand in hand short-term recovery efforts with the medium-and long-term objectives, such as the Paris Agreement, the UN Sustainable Development Agenda or the EU Climate targets. Besides the governments and the political parties, there is a growing willingness shown by society to transform our economy into a more sustainable and environmentally friendly wealth. There is a decarbonization desire that we need to deal with.

Renewable energy is also about economy. Unfortunately, its numerous socio-economic benefits have only become apparent specially in the last decade when the deployment of renewable energy technologies has become more widespread. Every year, renewable energy creates a significant and growing number of jobs worldwide due to rising investments. Moreover, the sector is constantly improving and innovating, and this has led to technological upgrades which resulted in falling costs. The whole Manufacturing Industry is developing in all its manufacturing base, innovating continuously their products.

Apart from the cost decline, infrastructure development has allowed the integration of variable energy sources in safe and feasible way. Moreover, renewable energy provides the needed resilience making it less prone to large-scale failure since some renewable energy technologies are installed in a distributed, modular fashion. At the same time, renewable energy gives more independence in terms of not depending on the oil or gas imported usually from countries outside Europe.

Needless to say, in order to install and benefit from renewable energy natural resources such as wind, water, sun, biomass etc. are needed and after a proper cost-benefit analysis the right technology should be chosen for each location, in order to make best of it. Europe is affluent in the mentioned resources and it has become a leader in driving the deployment of renewable technologies and there is the goal to become the world number one in renewables.

The industry is thoroughly working on technological developments such as floating wind turbines, wind-hydrogen hybrid projects etc. Governments and politicians from our side would need to push an innovation on the market legislation to follow up with the speed of integration of renewable energy. There is a lot of money willing to invest into renewable energy and the governments should establish regulatory frameworks which give investors confidence to go in. And last but not least, we need more projects.

Costs have come down dramatically and the field of application has really broadened, renewable energy innovation is really changing. This is a moment of opportunity, alignment of all stakeholders will define the success of the green and digital transitions. Let’s make the best of it.

This is the reason why we, the Young Democrats for Europe, call for a consultation of all the stakeholders in order to quickly increase renewable energy in our energy mix. Green transition won’t go with the consent of the people. If economic inputs are already foreseen, we need to get the European citizens on board with a transition that will change their way of consuming as well as their landscape.

In order to so and relying on the leading European companies, we also encourage the launch of an “Airbus” of renewable energy. Cooperation and integration are at the root of the European process ongoing for 70 years. We want to strengthen it with the goal of the XXIth century: achieving the quicker that we can carbon neutrality. 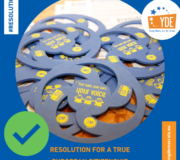 Resolution for a true European citizenship