We should remove words as race, woman-man and start to think as HUMANS

What is the future for equality and equity? , Press release (PR)

On September 19th and 20th representatives of our youth organisation partners visited Bratislava and Slovakia for the first time, they were from different parts of Europe.

Civil association, Young Europeans is committed to the Slovak European Democratic Party, a member of European Democratic Party (EDP-PDE, the ALDE Group in the European Parliament) and not only for its history but also for sharing pro-European values. Thanks to  the financial support from EDP, for several years young people can have meeting with another people from more than 7 European member states, exchange mutual experiences and information, organise common projects to support the spread of democracy development and the deepening of European identity in order to eliminate hatred and national discriminations, break down the fear of unknown and help all young Europeans to understand that it is not possible to lose their own identity while respecting the rights, values, traditions and habits of other people.

EDP-PDE took under its wings an international youth organisation Young Democrats for Europe (hereinafter YDE), which has offices in Slovakia also thanks to the civil association Young Europeans. From 2013 is the chairperson Miroslava Demkova and therefore with the manager of civil association, Linda Kohutova, this year they decided to invite to Slovakia their European friends.

On the 19th of September in the Zamocka street, where the offices of the organisation Young European are situated, a meeting of the Young Democrats for Europe was held in the evening, with Mr. Martin Leveneur, Executive Manager of the EDP- PDE as guest. Besides,  with pleasure, there was also a representative of the French observing member  Jeunes Forces Democrates. This team aims at leading activities until the next congress of association which is planned on June 2014, after euro parliament elections.

“The official acceptance of Jeunes Forces Democrates (JFD) as a full membership of YDE, for me personally, hides significant symbolism. In 2014 will be held the widest democratic elections in Europe, to this date will forever bind their entry to the YDE too. With the current increasing media and political extrusion of euro scepticism, will be needed especially young forces for democracy development, how we can figuratively label the name of the association. Although the statutes do not allow accepting new members at regular council of the association, JFD is with us part of the euro-youth family and no one doubt about their equality with other members. I am very welcome the inflow of new young forces in our team, it is a clear signal that for young people the Europe is not strange task, “says President of the YE.

In addition to YDE organisations from EU member states, a member from the organisation from San Marino, Alleanza Popolare,

was present in Bratislava and was represented by Miss Sara Cupioli. Demkova adds: “as it on the first sight may seem, they are our Italian friends. Even its geographical position San Marino is located on the map of Italy, not everyone knows that San Marino isn’t a member of the European Union. It has its own law, the government and parliament, which is different considerably from the Italian legislation. Sara has to show a passport of San Marino when she is travelling through EU. On the 20th of October they will have a referendum about the question of joining in the EU. Me, as well as our European representatives, we hope that not only Sara will be soon able to travelling easier, but all San Marino’s citizens, will draw and feel on their skins the benefits which EU membership brings to its citizens. We consider it as a very important that young people in San Marino will participate in the referendum in a big amount as it is possible and publicly decelerate their own intention of joining the EU.”

The YDE Council, on Thursday in Bratislava also used for the first time the advanced options of IT technology, when Miren Martiarena from Basque country and general secretary of the YDE, could attend council with voting right through video conference. The meeting of young activists from Europe did not end on Thursday council.

“We wanted to share with a public, the meeting of active young Europeans, mostly the main representatives of home organisations. So we decided in cooperation with chairman of the Slovak European Democratic Party, Antonio Parziale and vice chancellor of the Pan-european university in Bratislava, doc. Vlasta Kunova, to prepare an interactive conference. All young people without distinction could personally meet, get to recognise and work with interesting personalities of youth euro-policy on the ground of the prestigious Slovak university.” Demkova said.

Among participants, there were the youngest member of the city council in Rome, Valerio Casini, as well as for the YDE, the chairman, Marco Cappa from Italy, Vice-President from Cyprus Marios Kaminarides, his compatriot Andreas Televantos who is the  chairman of the European Youth Party in Cyprus, the newly elected chairman of the French Jeunes Democrates Antoine Carette, Pierre Bornand who is one of the Vice-President of the other French organisation  Jeunes Forces Democrates, and Aleksandra Rosinska, chairperson of the Polish organisation Zwiazek Mlodziezy Demokratycznej of Warsaw. There also were some representative from Slovak youth organizations, such as Lenka Kožárová and Peter Kaščák, Vice-Presidents of New Generation, Norbert Kucharik, chairman of JEF Slovakia and Miroslav Hajnoš, the Chairman of the European dialogue of perspective attitude.

The youngest co-coordinator of the second work group was Patrik Gujda, Roma man from the East Slovakia, who participated in YE activities for the first time in public, he presented himself on the ground of the Pan European University: “I am 21 and I’m working as an field worker assistant  in village Markovce with more than 700 years history and 900 citizens, I cooperate with many government institutions and experts, I meet old and young citizens of this republic, who live on the edge of society and have zero chance to success in the future.”

The manager of the association explained to us what the difference of conference from the other was: “Citizens association Young European except of trying to open new horizons to young people, we want to bring them to the act- action. That’s reason why we decided with Mirka to organise a conference with young people, about young and toward to the young. We participated on several debates and meetings but one thing bothers us. As you sit down somewhere at the conference, listening, waiting for the coffee break, then listening again, you cannot wait to lunch, and again listening to… It is true that all similar events have their space earmarked for debate, but many people for various reasons still hampers take the microphone in their hands and draw attention to them, even if it is just by asking. Mirka wanted to find a way to actively engaging with all participants to let them also feel comfortable, as home. That is what we achieved with creating working groups and I think that everyone was leaving on Friday satisfied because to the outputs put a small piece of their own. ”

The conference was organised with 4 workshops, which were realised simultaneously. Each participant could choose from four different topics and participate in the work of one of them. The organizers took into consideration the international guests, but also domestic youngsters of the organizing country. Two working groups were working in English and for who felt insecure with the latter, they could participate and analyse two other interesting topics in Slovak.

Topics of work groups on the conference:

Workshops brought the expected result, for YE and it was also confirmed by the participants, A. Pilhovičová: “Such conferences I have not experienced a lot so I cannot compare but I really liked the conference on Friday.  It was one of the more interesting ways to broaden your horizons.”

“I evaluate the entire conference at a very high level, either organizationally or thematically.” Miroslav Hajnoš (European Dialogue for Perspective Attitude)

“Changing the mentality and the way of thinking in order to understand disadvantaged people remove all barriers”, Andreas Televantos, “people don’t like changes, this is continuous problem of our society.”

“The education has to challenge prejudices”, Miroslav Hajnoš.

According to Lenka Kožárová and Petr Kaščák is “one of the main problems is stagnation of youth participations at local and national level except of strong influence of media, caused due to the negative presentation of politics, general disallowance for the opinion of young and low awareness about political affairs in their immediate surroundings, support to eliminate these problems  is the increase of activity of existing organisations, their mutual cooperation and common public support for equal values.”

All outputs of the working groups will be publish, freely accessible and electronically produced for everyone, regardless of race, gender, beliefs. Electronics brochures will be prepared in Slovak and English language for those who want together with Young Europeans begin to think as humans. 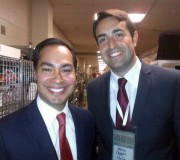 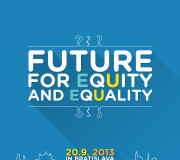 Future for Equity and Equality